Making beaded earrings can be a very easy project, especially after you've made a set or two and gotten the hang of it!  In this beaded earrings tutorial I'm going to cover 2 types of beaded earrings: the fringe type and the coral type (that's my description. I did a lot of SCUBA diving when I lived in Florida and these earrings remind me of coral. I don't know what they are actually called). 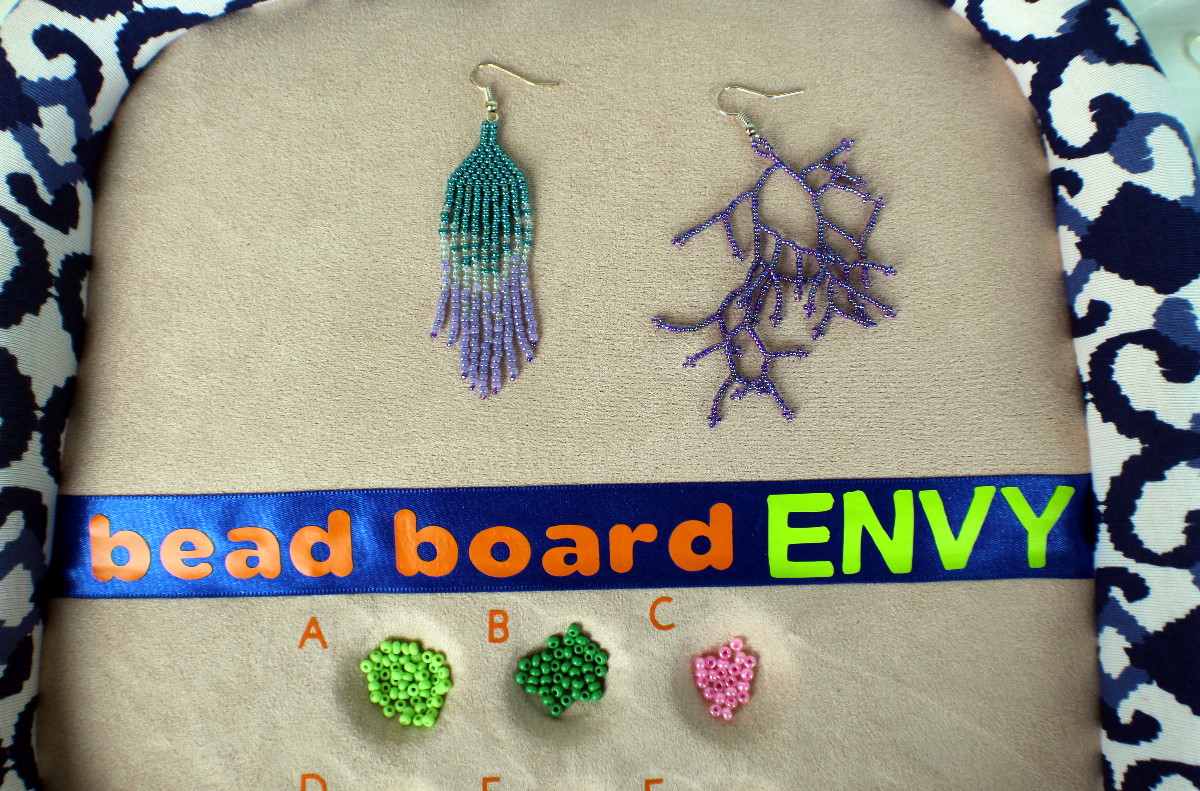 I know it's cliche to say the possibilities are endless, but they really are when it comes to fringe earrings.  There are 2 parts to these earrings: the pyramid part and the fringe part. 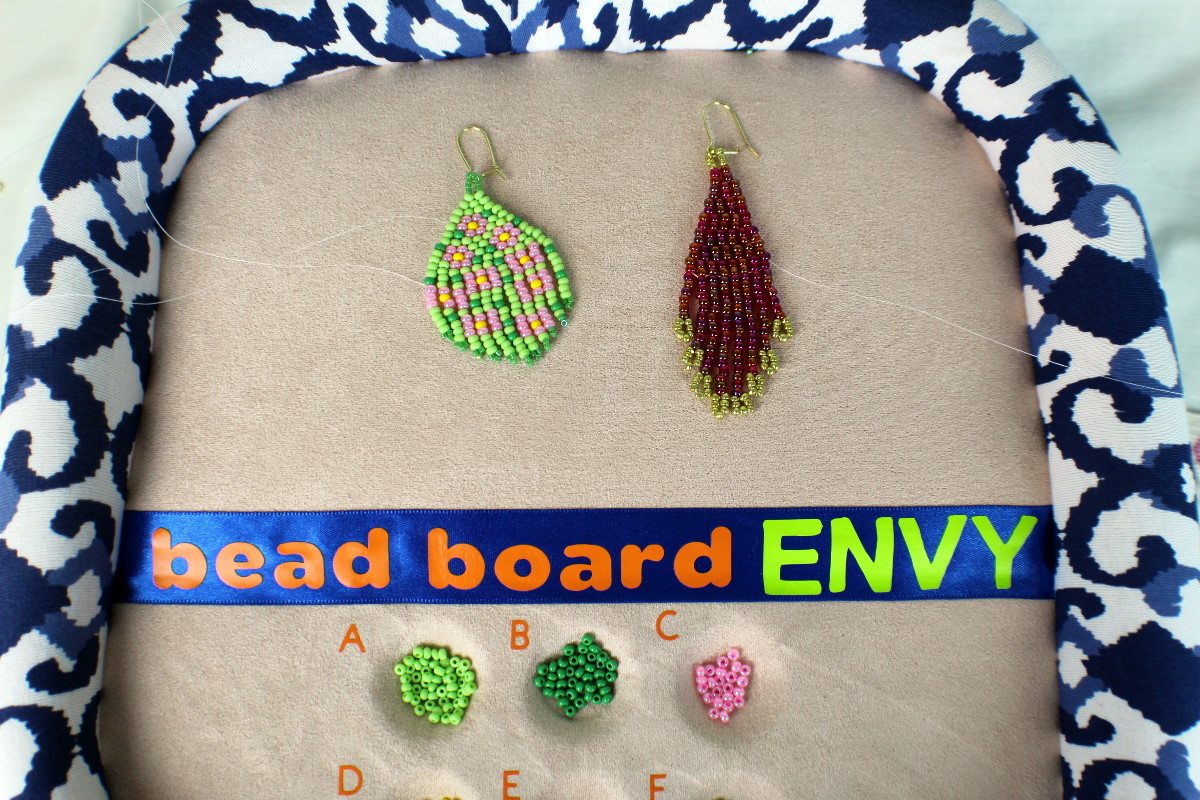 The same with the 2 earrings below, the difference is that these were made with 11/0 Delicas. 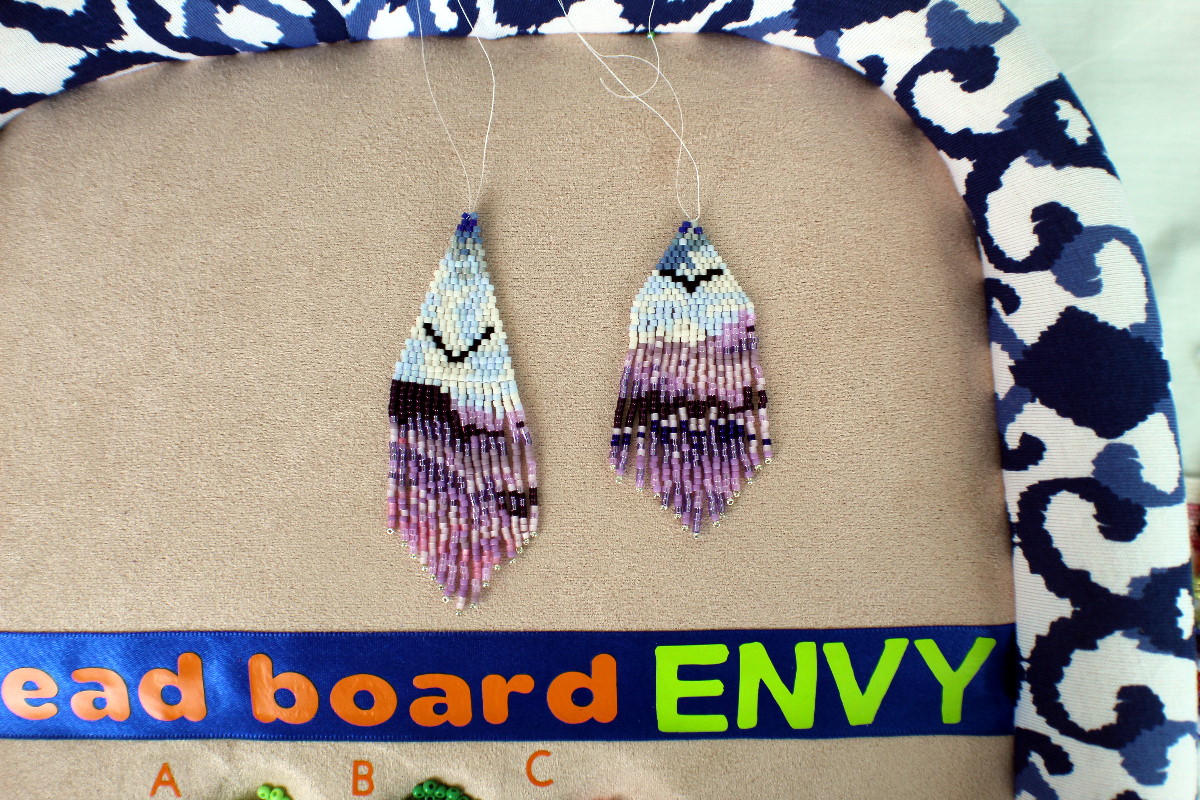 So, the first question to answer, how do you want the pyramid part to look?  You can also square off the bottom of the pyramid by adding the same number of beads in the row with ladder stitch.  These rows would look more like the fringe and would help stabilize everything. 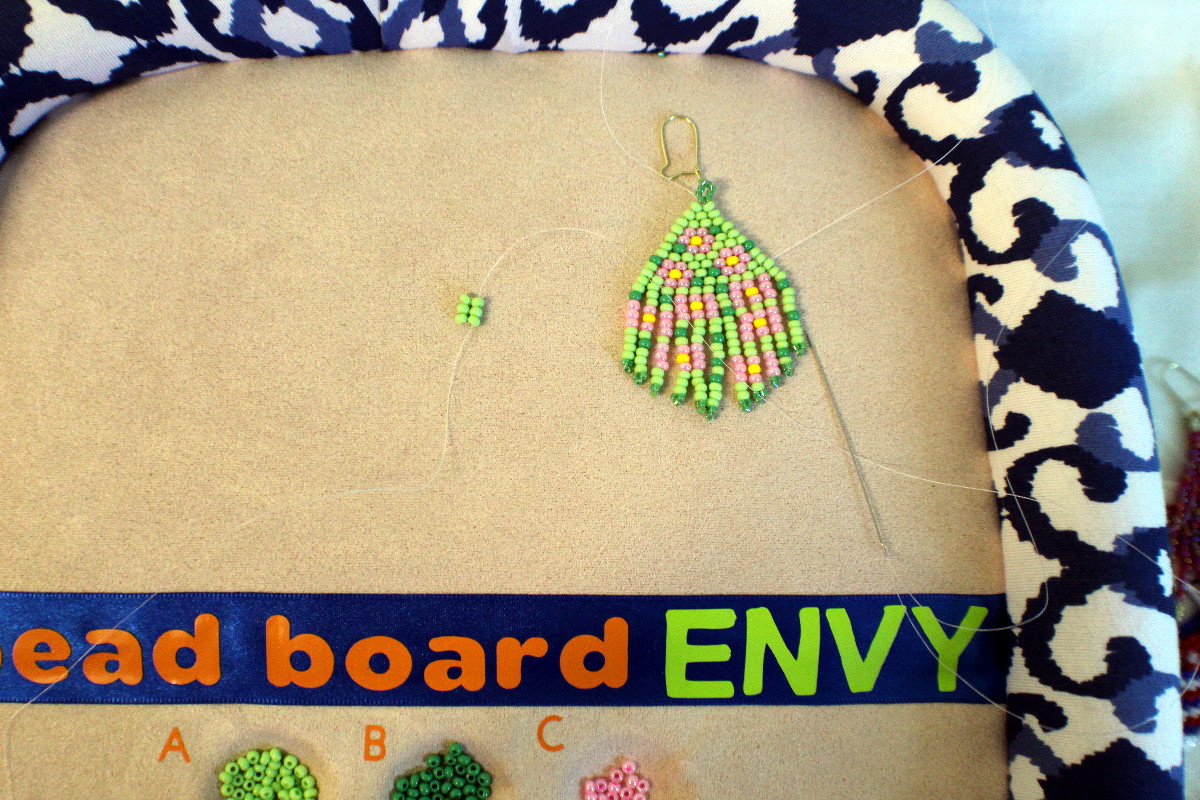 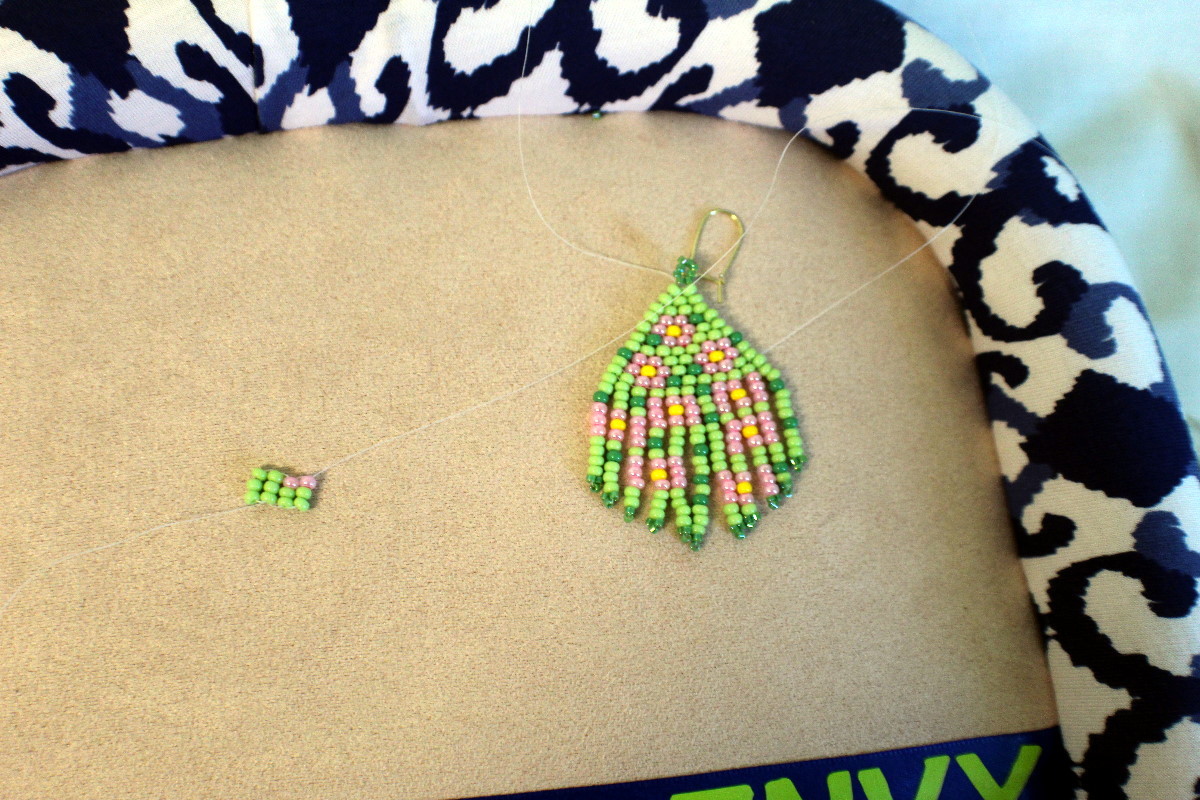 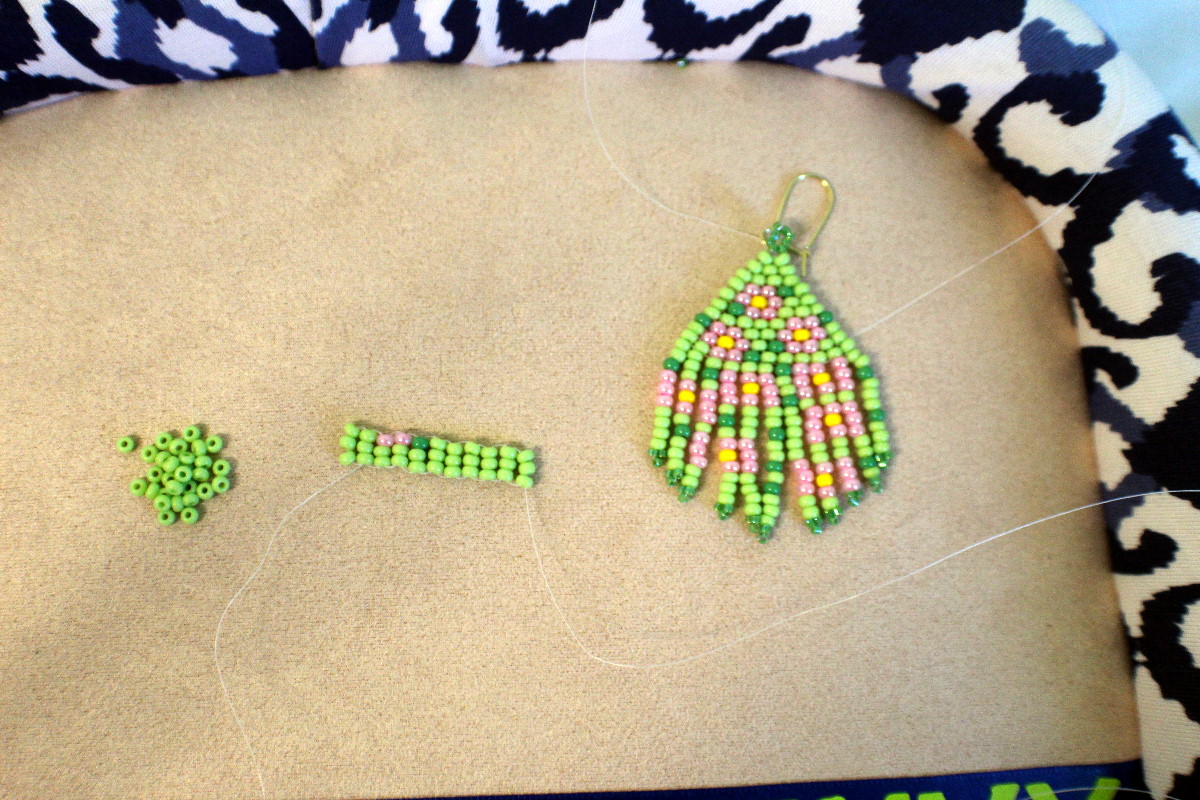 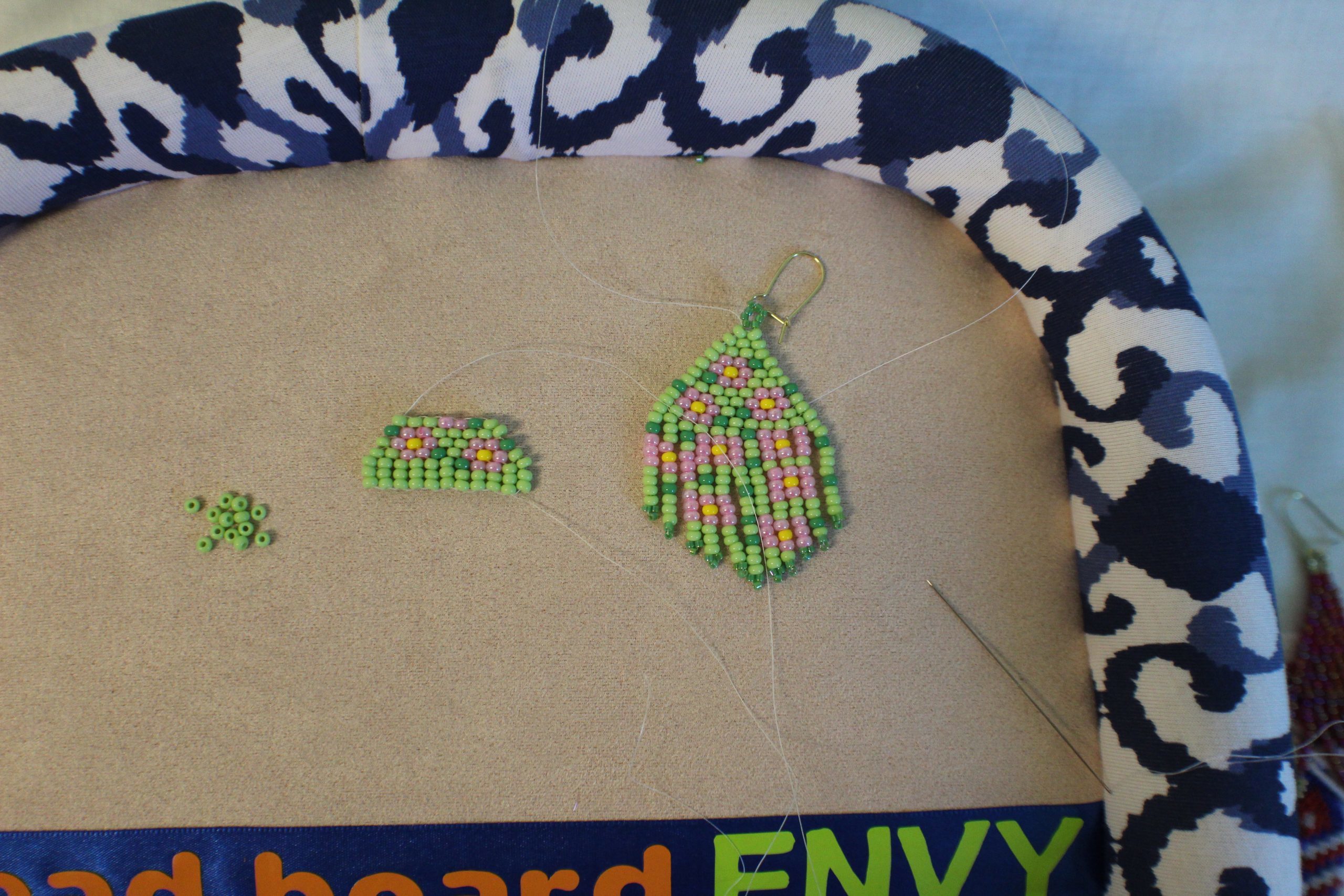 You can see in the picture above how adding a couple of rows to the 'bottom' of the pyramid squares it off and would allow the fringe to hang straighter.

Speaking of getting fringe to hang straight, let me give you a few pointers:

1. TENSION, TENSION, TENSION - especially if you are using Delicas.  The reflex is to pull the string really tight, however, that causes all those little Delicas to bunch up together and get all crooked.  Pull on the bottom and leave yourself a little room.  The bigger the seed bead, the less of a problem it is.

2. Use beading thread like Nymo instead of Fireline.  Fireline is stiff which works great for everything else, but not fringe.  It's also great because you only need white and black to do just about anything.  If you must use Fireline then use the 4lb so it won't be as stiff.

3.  The longer the fringe, the less of a problem it is, I guess the weight of all those beads helps.

So now we move on to the fringe.  Do you want to keep is simple like the red ones or get more complicated like my purple mountains pair?  I tried doing a butterfly design, first with Delicas and then with seed beads.  (I spent 8 days in bed with COVID so I had lots of time on my hands.) 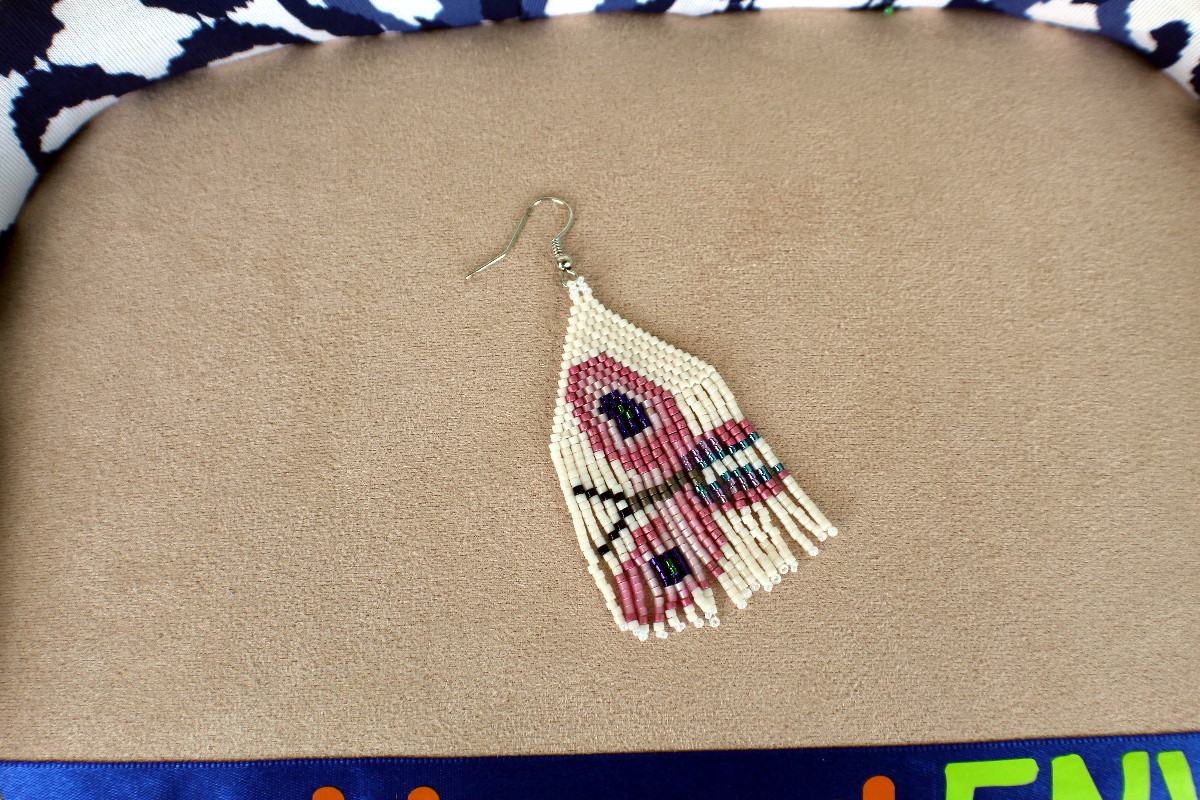 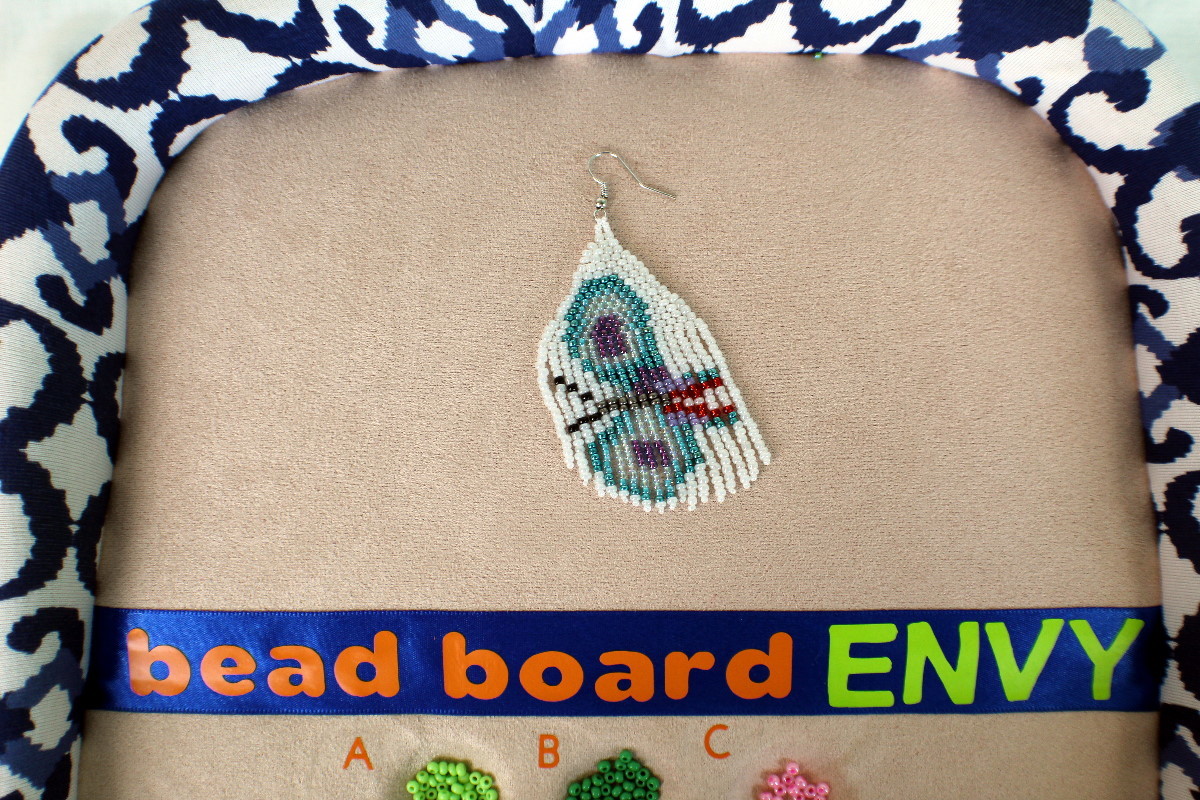 Let's just say I won't be selling that pattern!  I then decided to try something a little simpler. 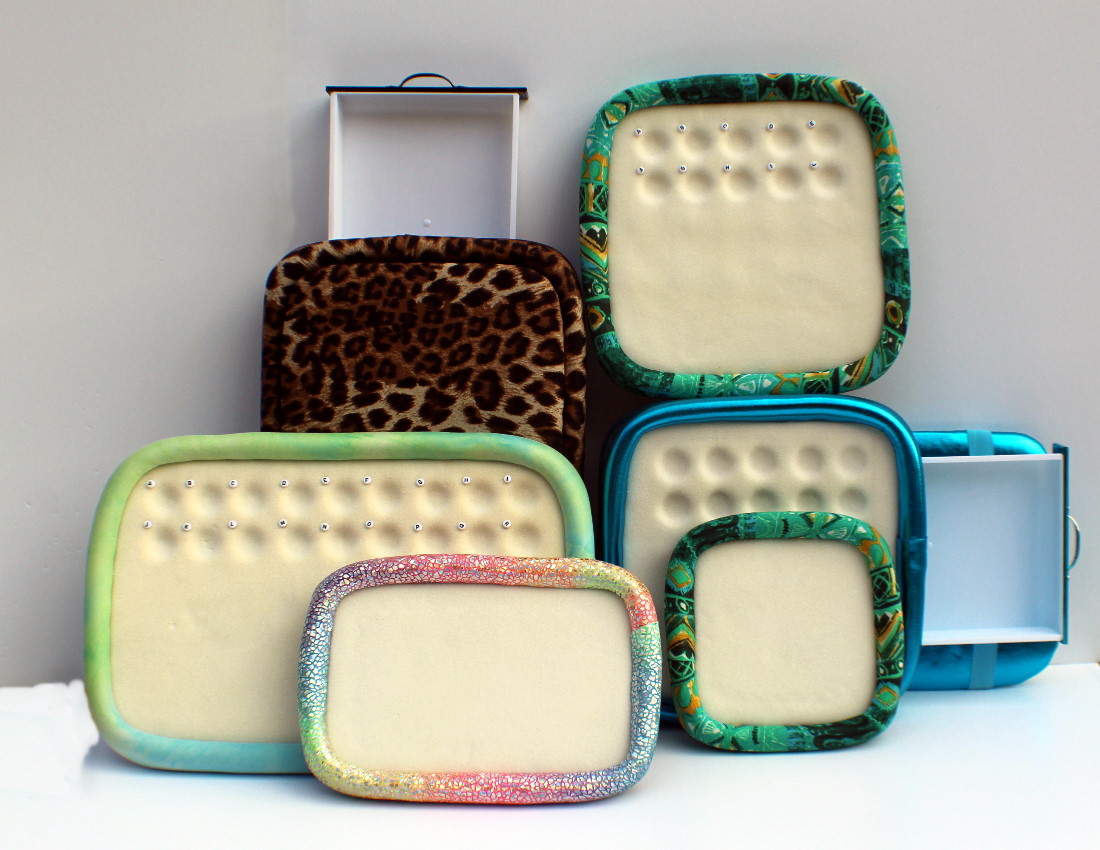 Check out this special offer -

Get The Bead Vault for FREE! 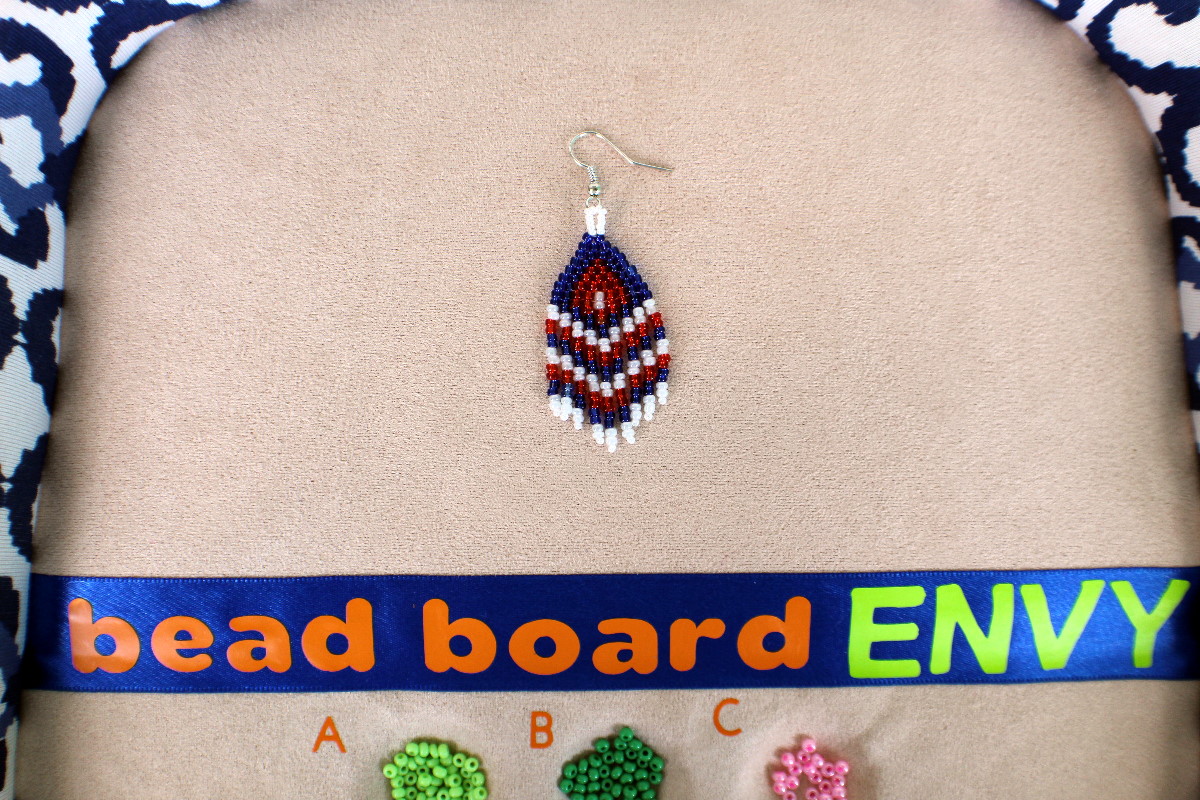 Then a quick tour around Pinterest for inspiration and the ombre fringe is everywhere, so here's my version.  I love ombre because it's always super simple and looks like a million bucks. 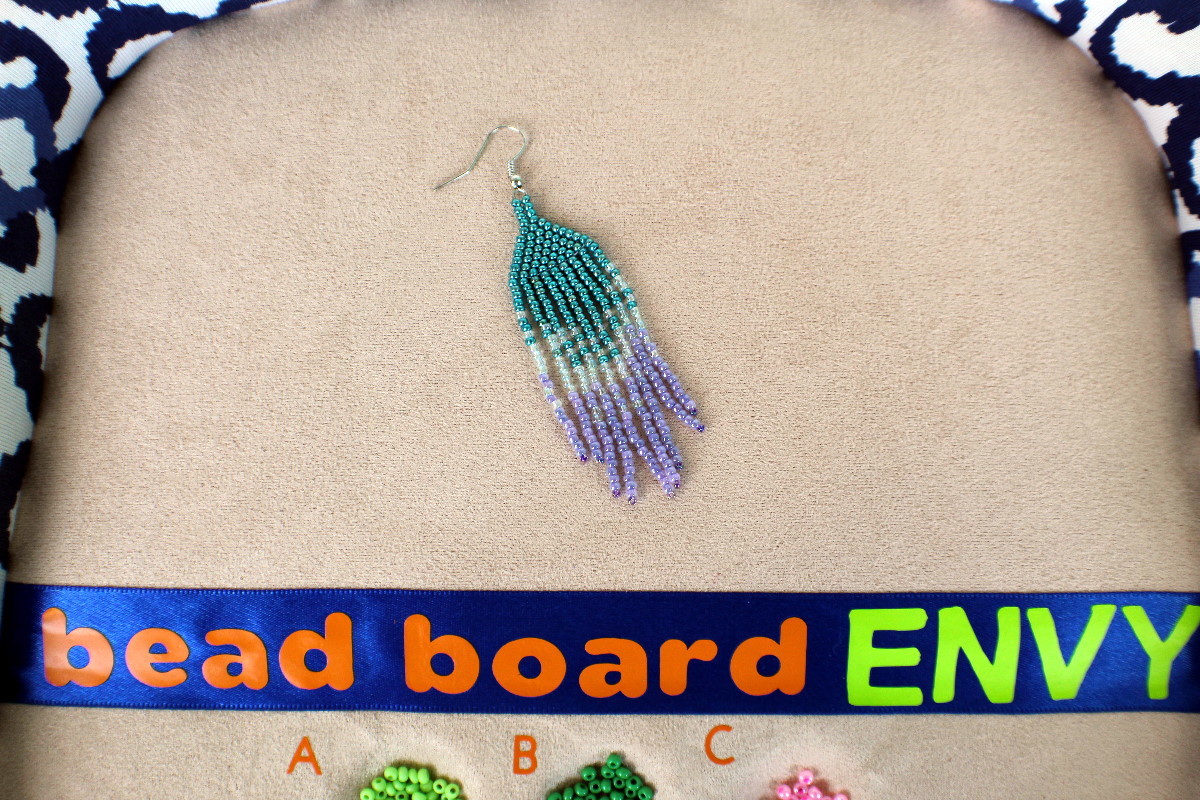 Another decision with fringe is how to end the strand.  (if you are new to beading, the issue is that when you string all those beads together, you need to run the thread back up through them to get to the next strand.  You need something at the bottom to "catch" the thread, otherwise the thread is going to come out.) With the ombre earring above, I had purple #15 rocailles that matched perfectly.  In the red seed bead earring above,  they have a gold sheen and I happened to have gold seed beads that matched, so I did a 7 bead loop at the bottom.

Now that we have talked about the 'pyramid' part and the fringe part, it's time to start designing.  Believe me, if you want to do something complicated, you need a pattern, hence,  I created this template.  You can doodle on it with crayons or you can open it in MS Paint and doodle on it in there. 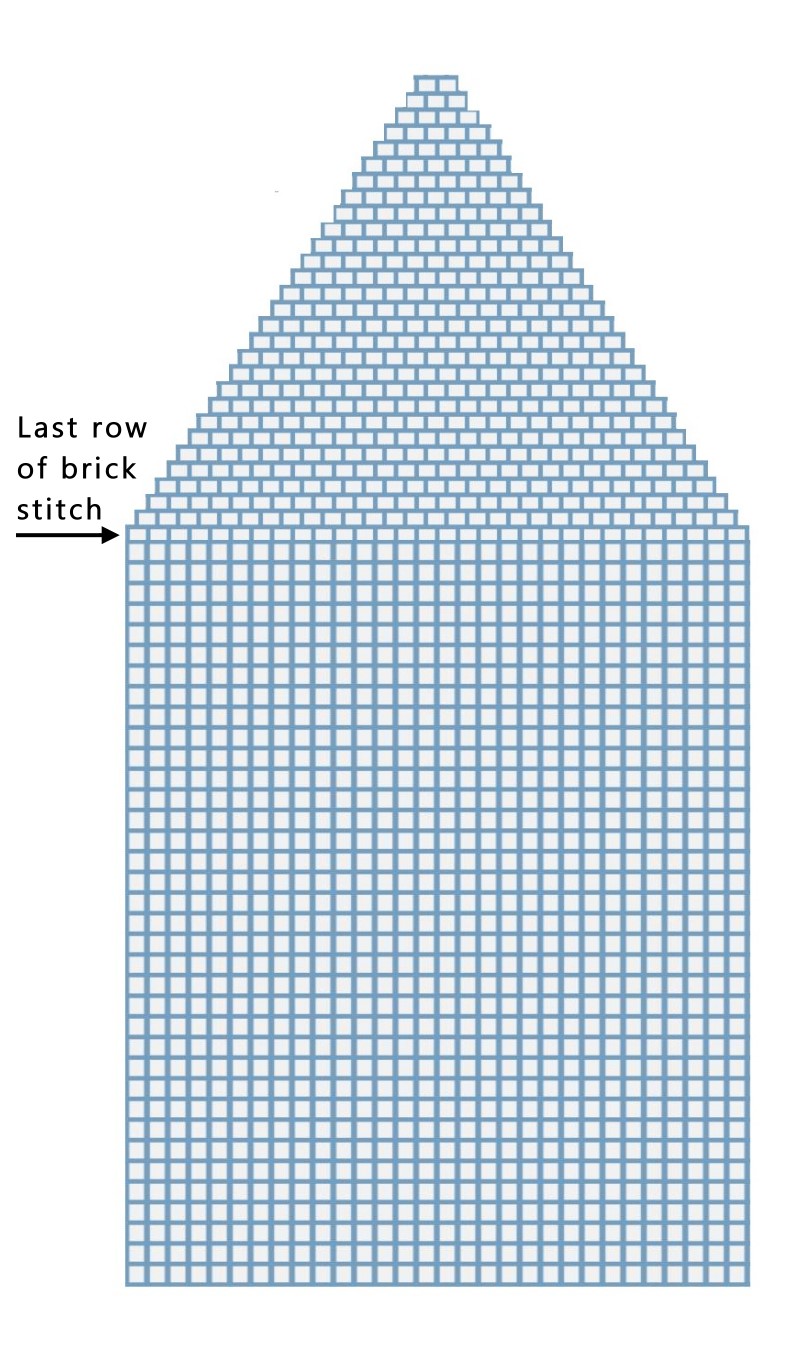 Let me show you how I created the flower earring. 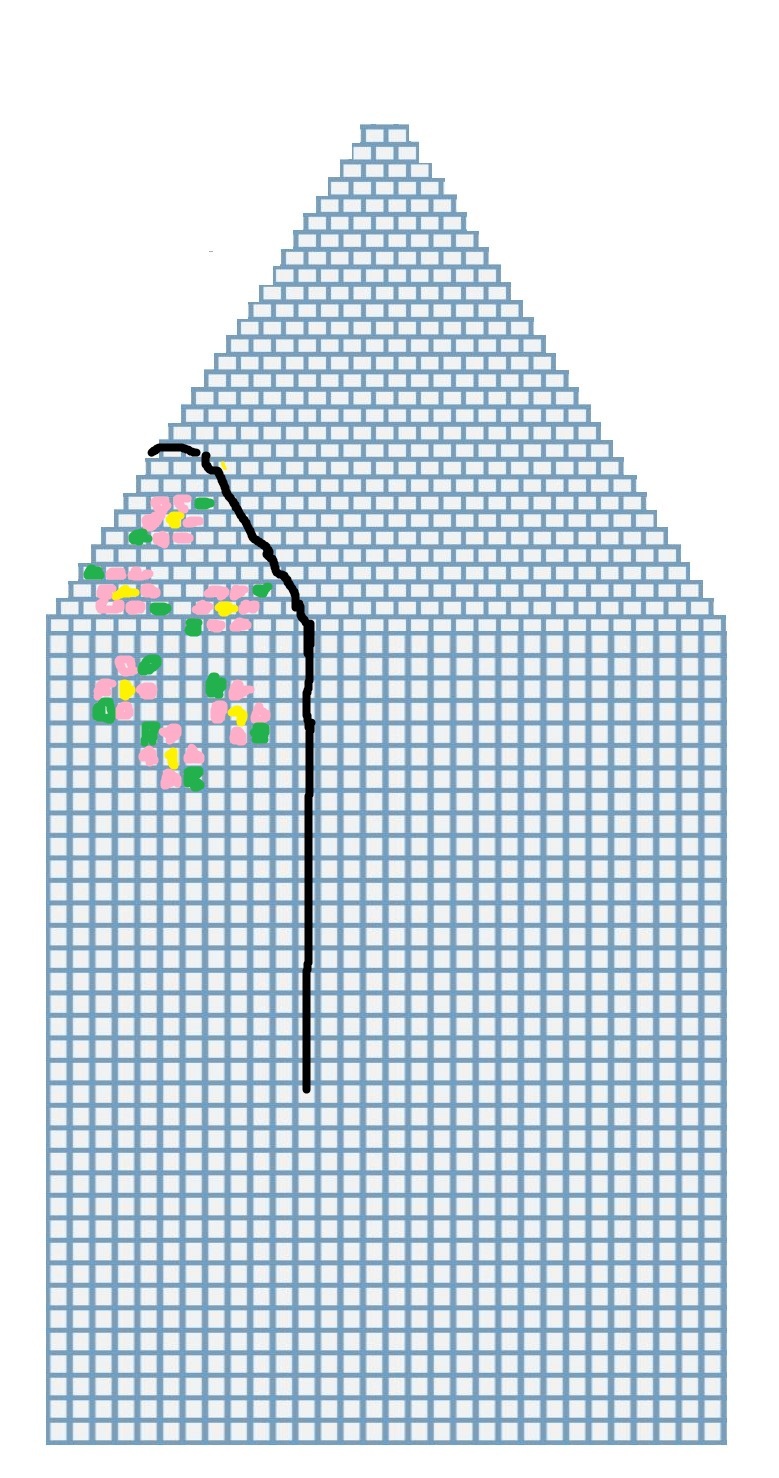 I opened the file in Paint and started doodling.  The flowers were too close together.  Instead of starting over, I just went to the other side of the template. 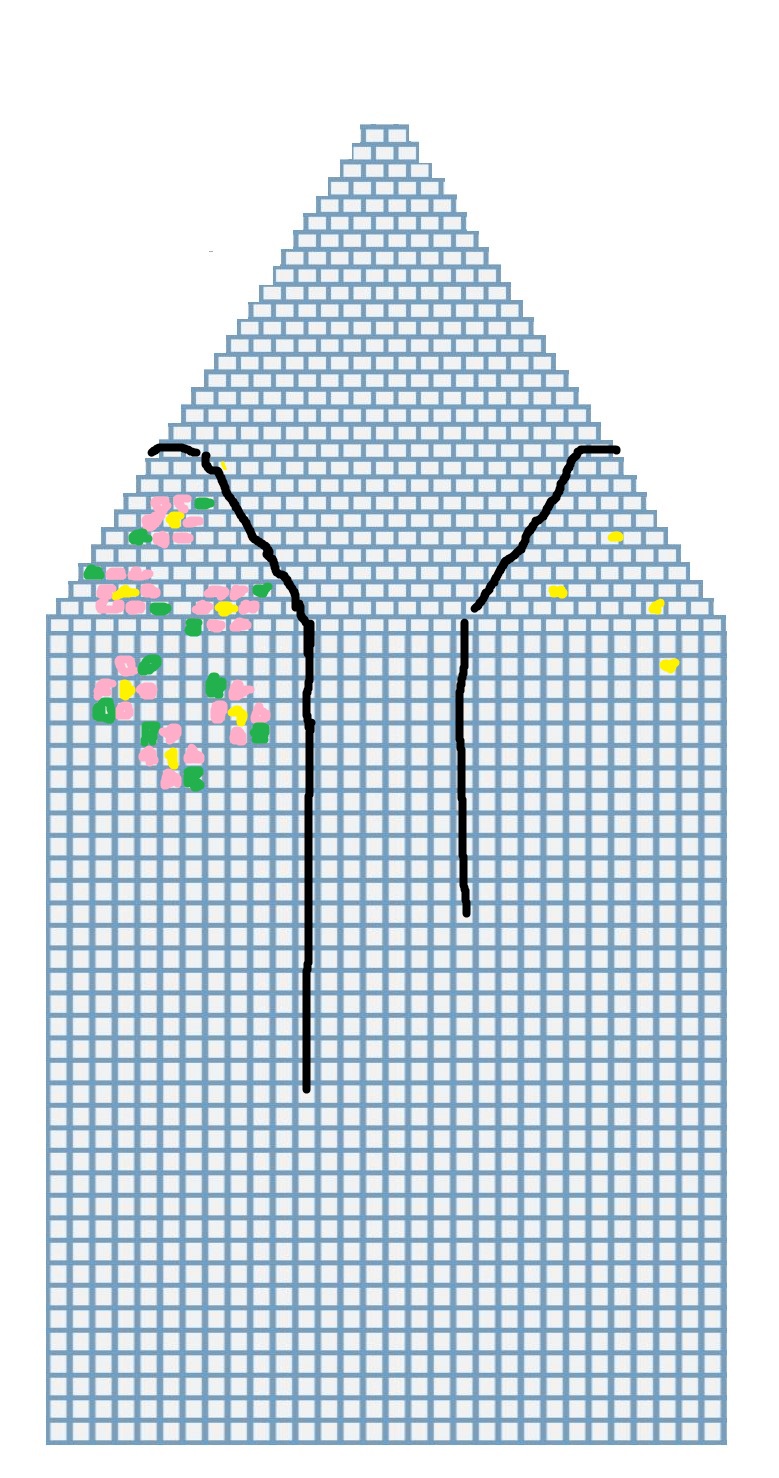 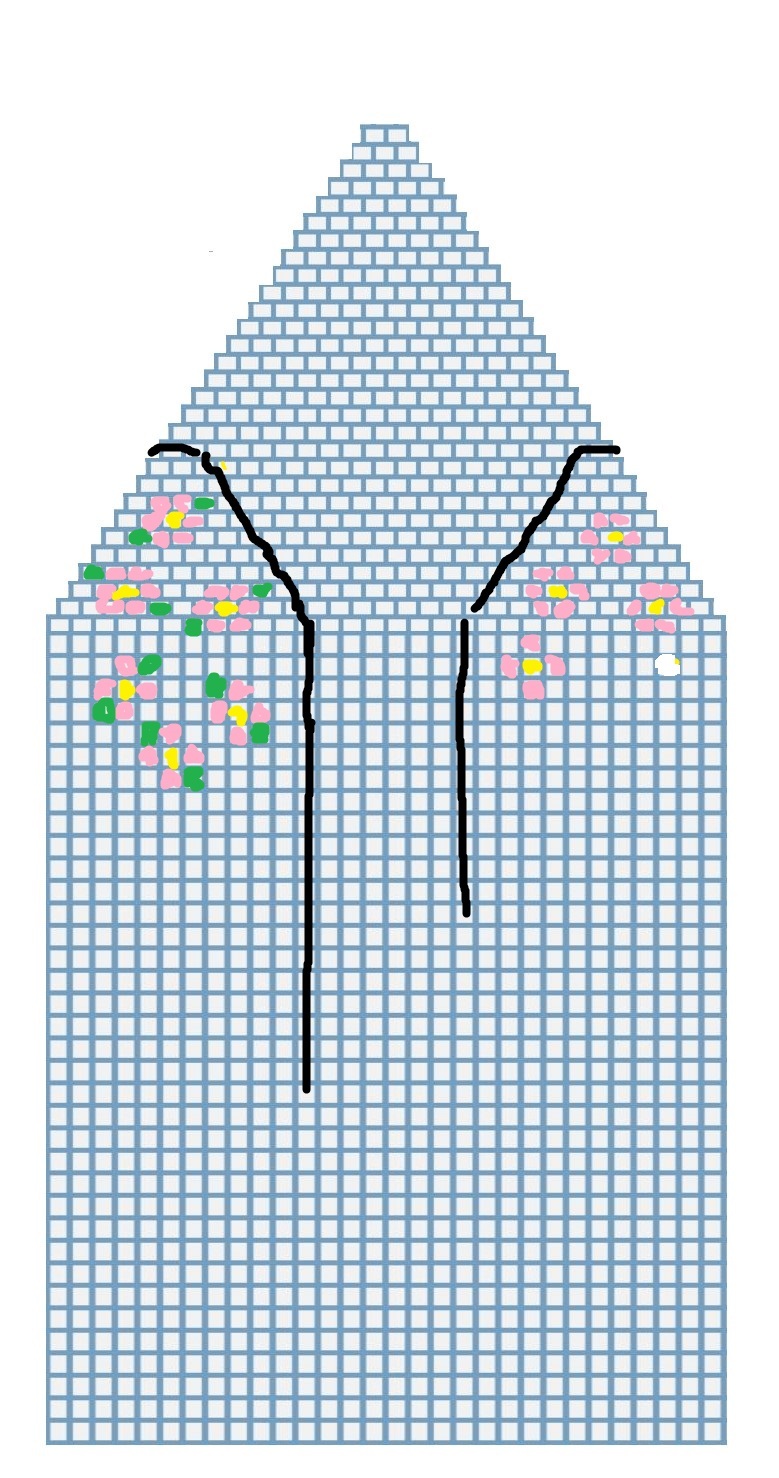 I am not an expert in Paint.  The erase feature put a white dot instead of 'erasing' but I could work with it. 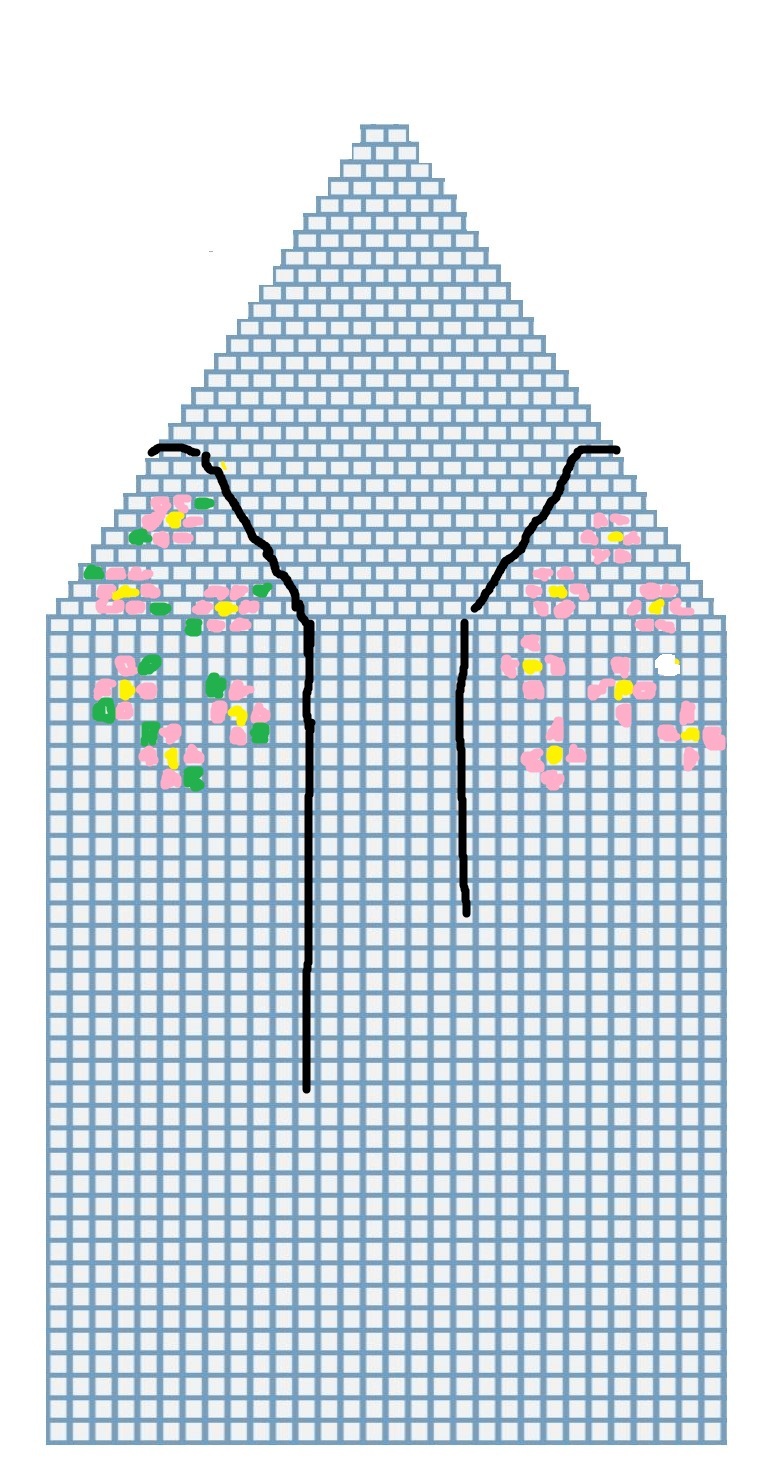 I wanted to make sure I had the flowers spaced nicely.  At least with Paint, you can back out of the last few steps if you don't like the way it's going. 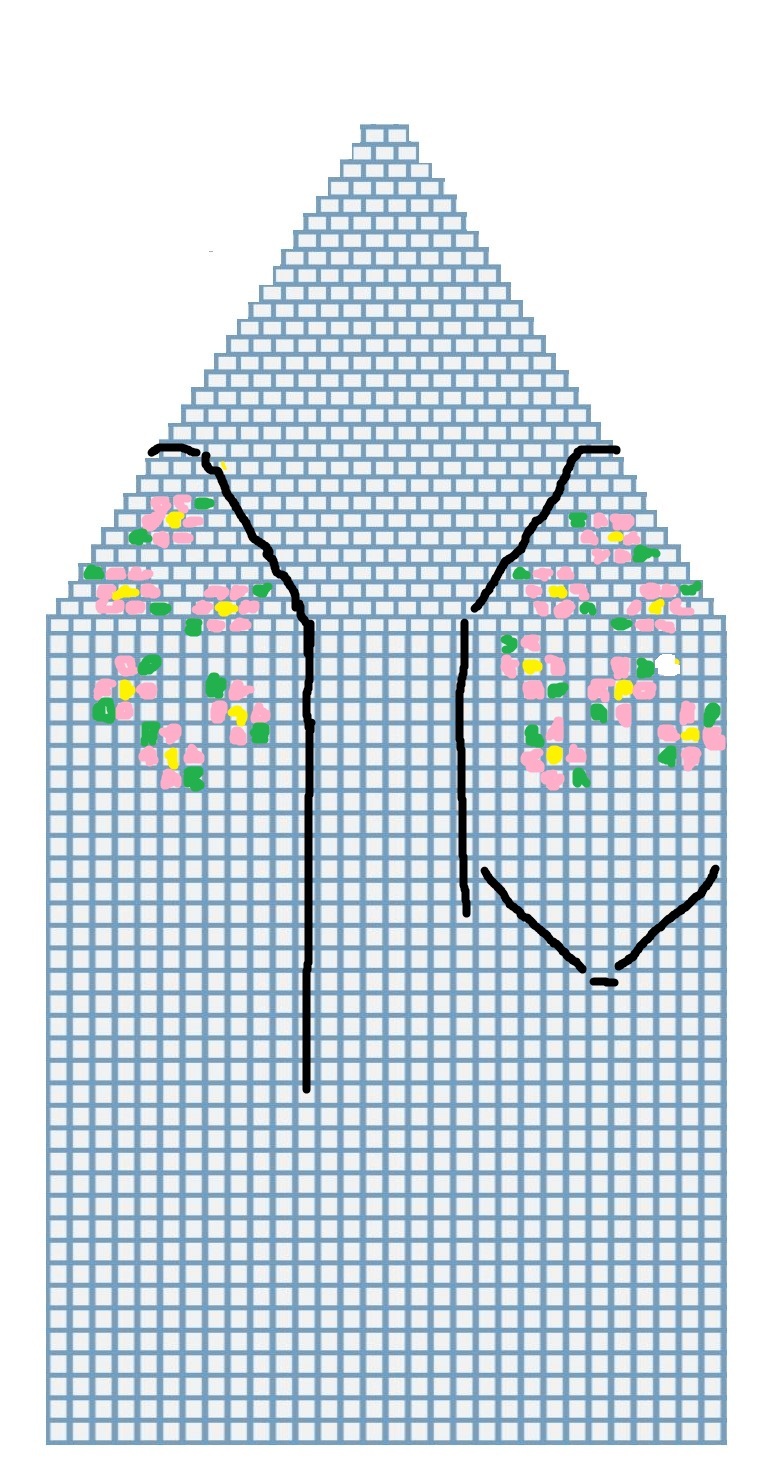 Adding leaves and deciding how long the fringe should be. 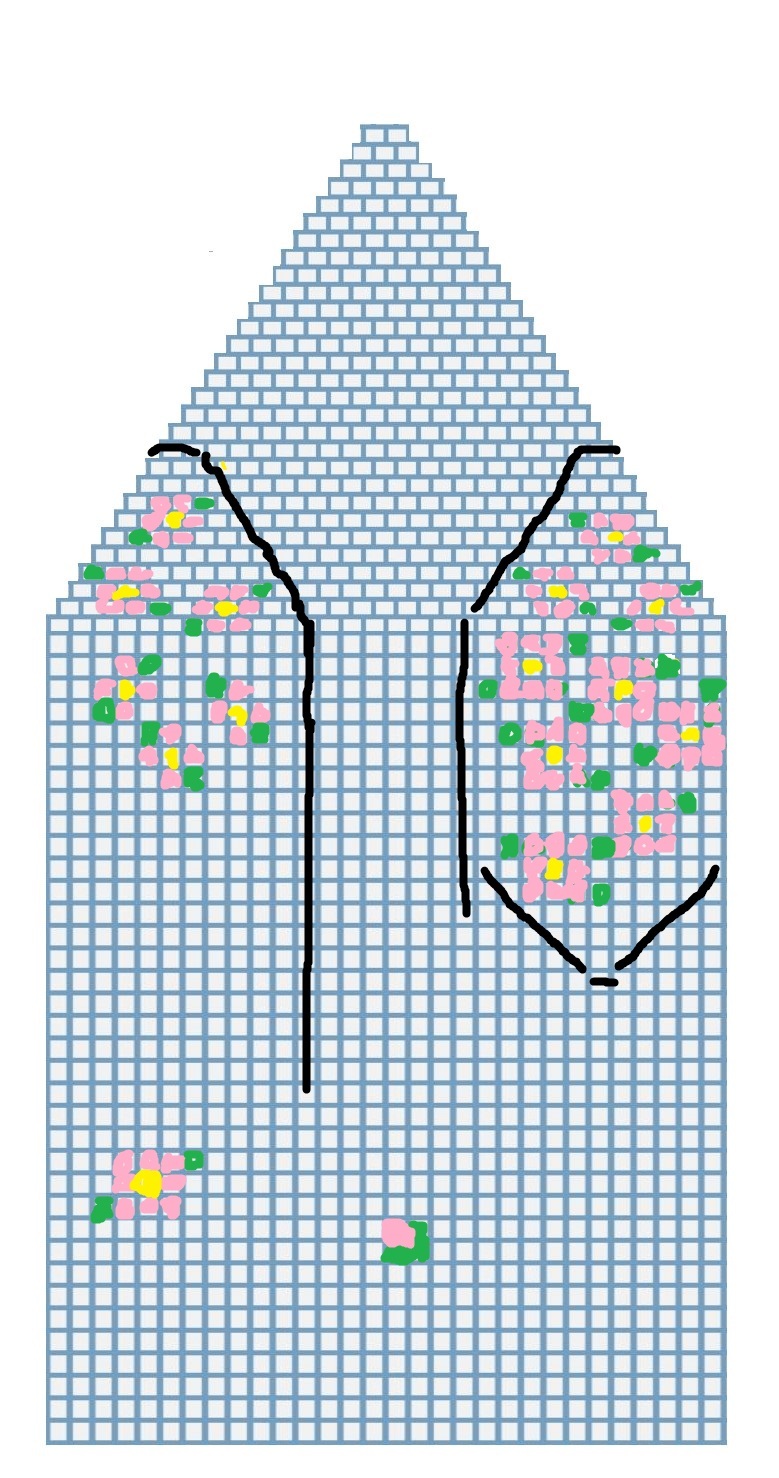 Filling out the flowers... 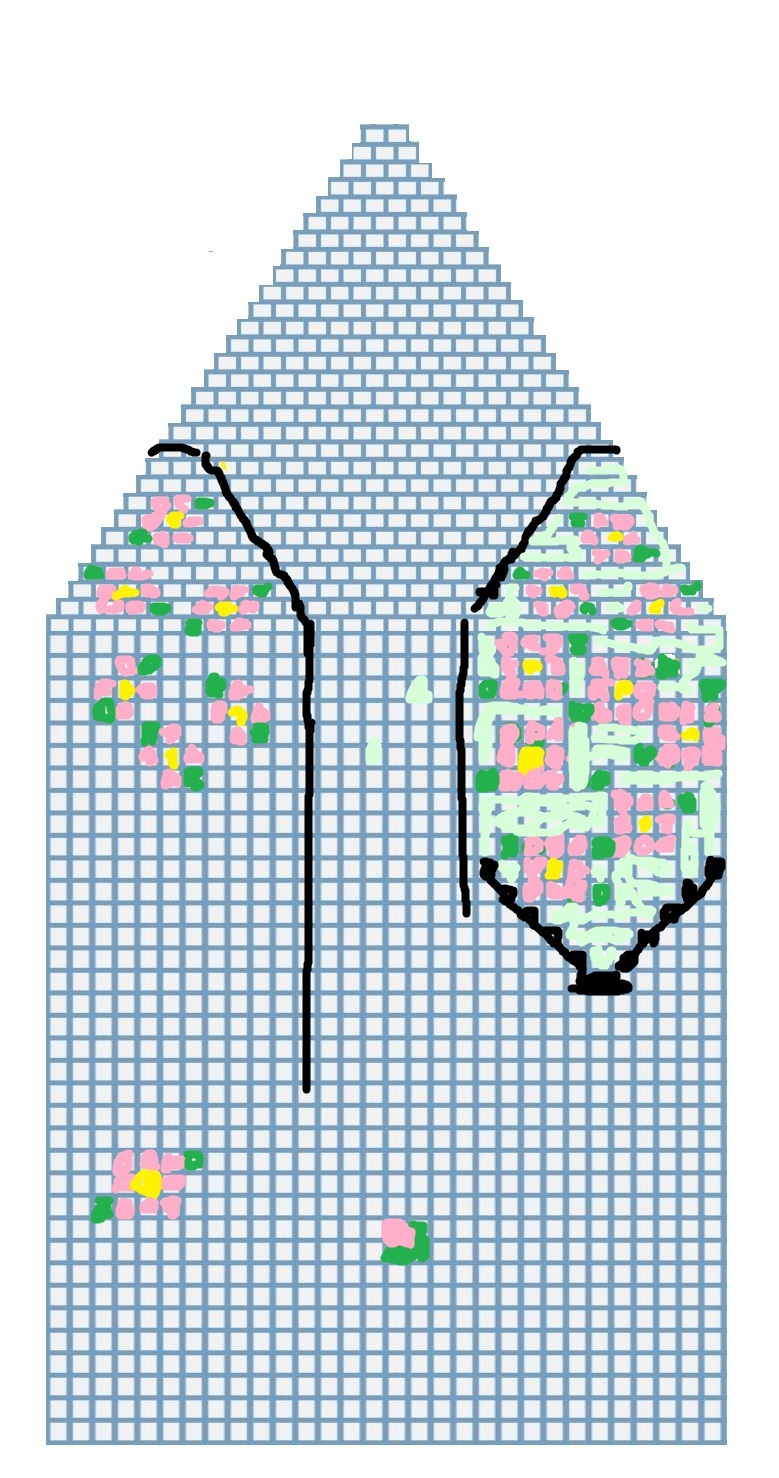 Giving it a background color and it's done!

The video below touches on the highlights of how to make these earrings if something isn't clear to you.

The second design in this beaded earrings tutorial is the "coral type".  It is way more freehand. 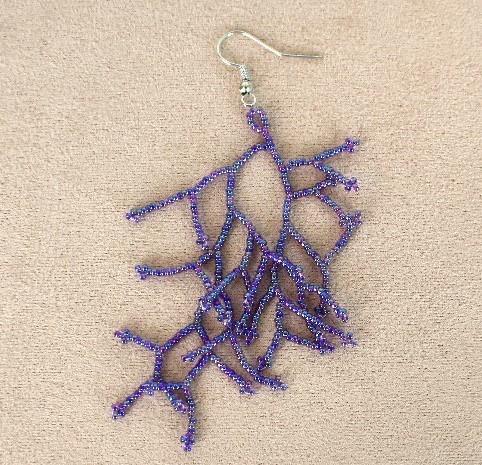 Click here for part 2 of this post where I show you step by step how to make these earrings. 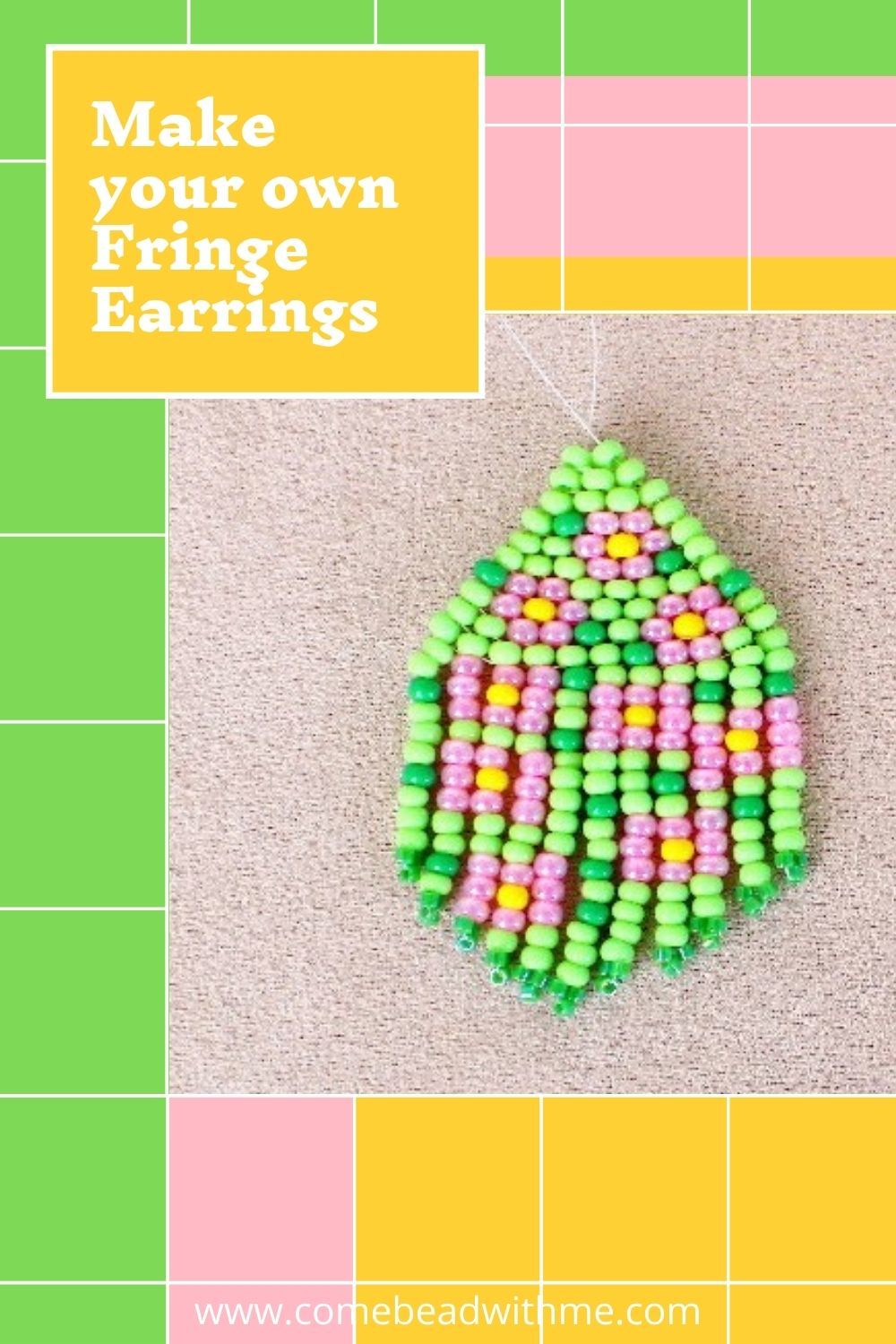 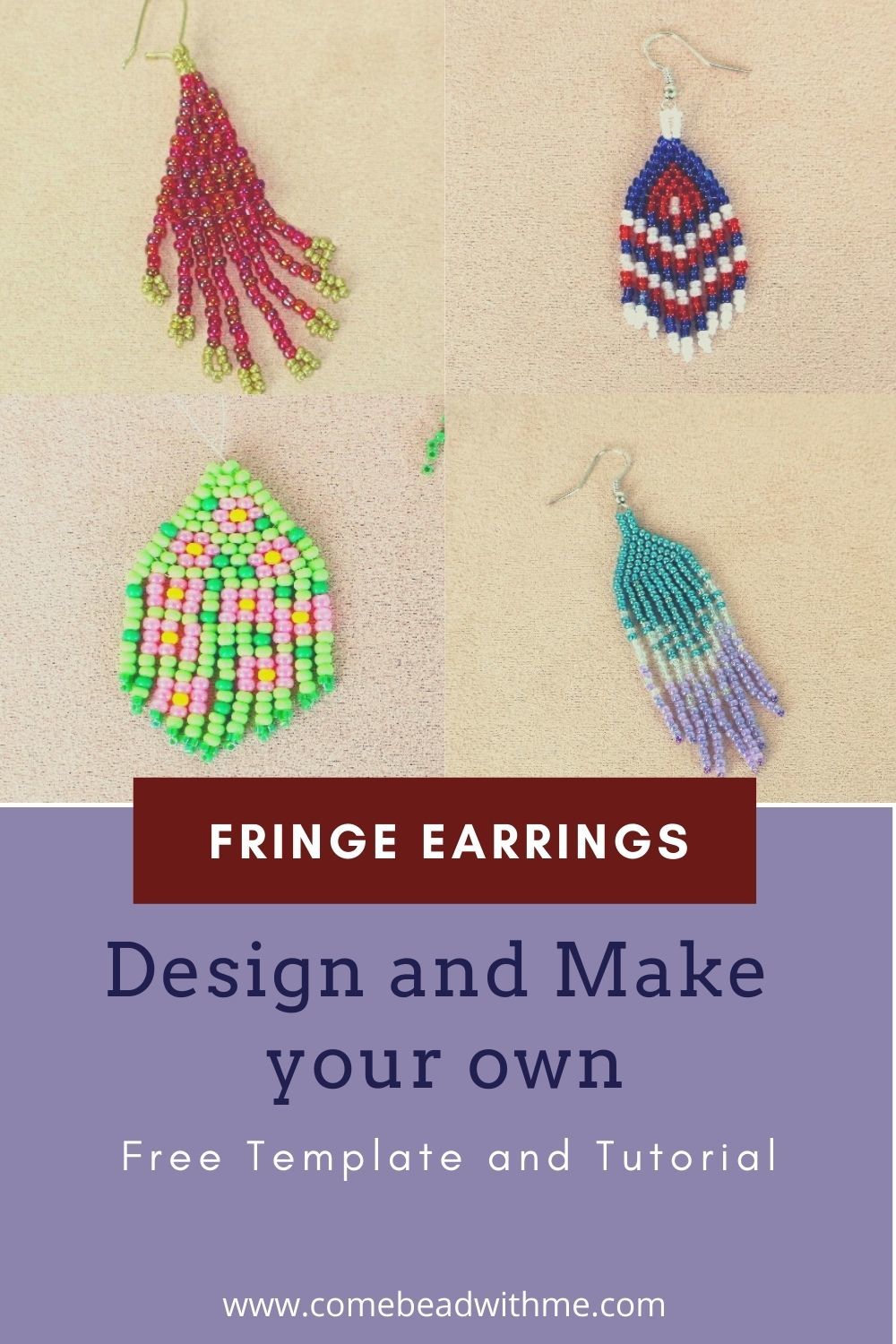 I'm Linda Sortino, I have been crafting for a very long time, but I am passionate about beading!

My kids are grown so I have plenty of time to try new things. I love taking a pile of beads and trying to make magic happen!

I'm so glad you came for a visit, I hope you find inspiration or a new project that will inspire your passion. 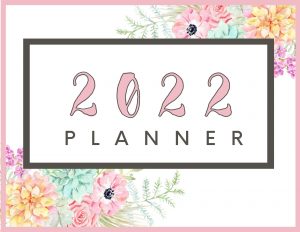 I was in desperate need of a 2022 printable calendar.  I don't END_OF_DOCUMENT_TOKEN_TO_BE_REPLACED 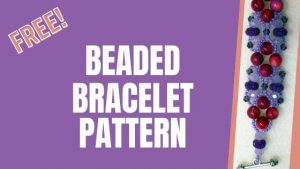 We had a lot of rain last year in southeast Alabama, so END_OF_DOCUMENT_TOKEN_TO_BE_REPLACED 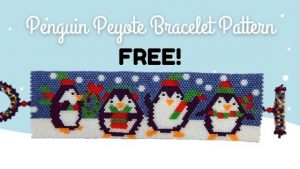 We say it every year, don't we? "I can't believe Christmas is END_OF_DOCUMENT_TOKEN_TO_BE_REPLACED 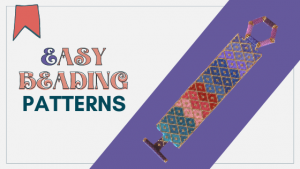 At some point, we all need easy beading patterns.  It doesn't matter END_OF_DOCUMENT_TOKEN_TO_BE_REPLACED 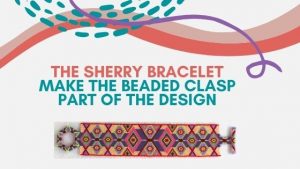 In this post, I am going to show you how to add END_OF_DOCUMENT_TOKEN_TO_BE_REPLACED 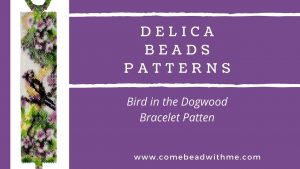 Read More
We use cookies on our website to give you the most relevant experience by remembering your preferences and repeat visits. By clicking “Accept”, you consent to the use of ALL the cookies.
Cookie settingsACCEPT
Manage consent

This website uses cookies to improve your experience while you navigate through the website. Out of these, the cookies that are categorized as necessary are stored on your browser as they are essential for the working of basic functionalities of the website. We also use third-party cookies that help us analyze and understand how you use this website. These cookies will be stored in your browser only with your consent. You also have the option to opt-out of these cookies. But opting out of some of these cookies may affect your browsing experience.
Necessary Always Enabled
Necessary cookies are absolutely essential for the website to function properly. This category only includes cookies that ensures basic functionalities and security features of the website. These cookies do not store any personal information.
Non-necessary
Any cookies that may not be particularly necessary for the website to function and is used specifically to collect user personal data via analytics, ads, other embedded contents are termed as non-necessary cookies. It is mandatory to procure user consent prior to running these cookies on your website.
SAVE & ACCEPT
Pin
Share